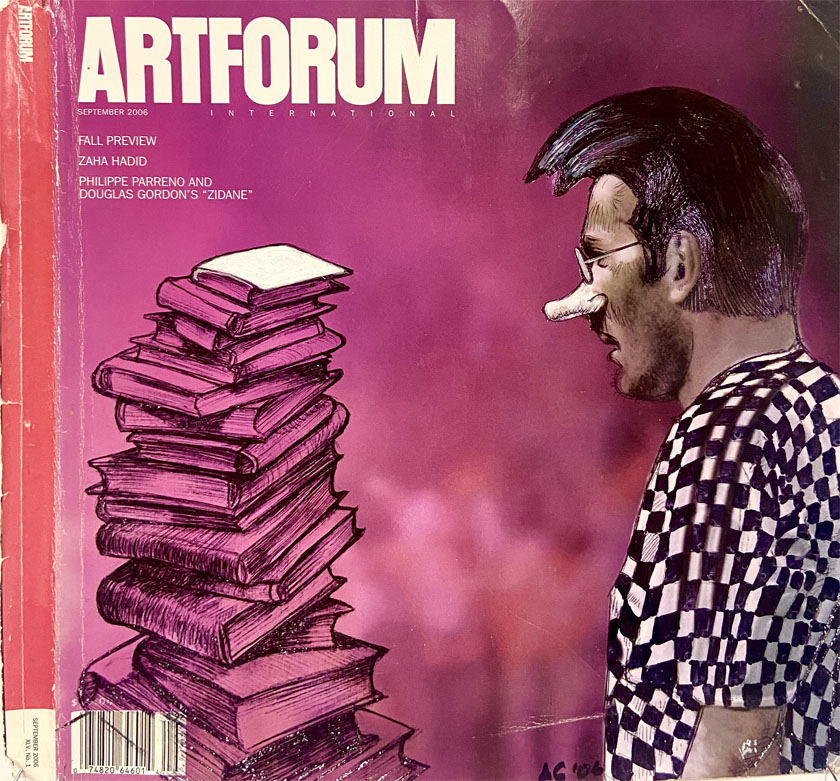 “The Ego Diaries” is a collection of reaction drawings on art magazine covers. Originally, these sketches were never intended to be a series to be shared and exhibited. They were simply cheeky acts of mischief contrived to answer the age old question, “How do you get on the front cover?” It all started in the 1980’s in New York, when as a young ambitious East Village artist I was confronted with the “Artworld”, who guarded its secrets of success like an impermeable fortress.

For decades, I’ve subscribed to art magazines and unblinkingly stared at the full page color ads before pouring over the articles, all the while staying current with the art trends, art theories, art speak, and the artwork that would become influential. This education was invaluable, and still to this day, I await unjaded for the next issue to arrive at my front door.

However over time, perhaps a bit of jadedness did sneak in. As I read the wordy articles, my mind would wander and I would get an idea for a sculpture. Instead of reaching for my sketchbook I would scribble out the idea on any clear place in the magazine I was reading. Over time, with tongue in cheek, I would draw my ideas over the front covers, intentionally cancelling out the photo image and by doing so, humorously thumbing my nose at Artworld politics and, as a result, eliminating the middle-man. I instantly had the ability to finally be on the front cover of Artforum or Art in America, not once but over thirty times!!

As with most experimentation through humor, discoveries were born. Surprisingly, an amazing thing happened, this activity became an avenue for a new creative process. In looking at magazine covers, the existing imagery (or lack thereof) spurred me on to concoct a new reality by adding my own imagery in a hybrid figure/ground relationship that would never have happened otherwise. This became a regular pursuit as I searched literally for pictorial negative spaces in magazine covers, often creating a solution to an art idea that was now resolved though the unknowing collaborations of this month’s “Chosen One”. Ironically, as this exhibition shows, many of these ideas started as a kind of cavalier “graffiti”, which then became the genesis for future paintings and sculptures as well as the discovery of new themes that then became larger unsuspecting poignant metaphors that evolved into thematic ideas of their own.

It is a healthy ego where one can stand back and then see objectively. Only then can the humor of our lives defuse the uncontrollable nature of the unknown through an ironic resolution. The most satisfying fact of all is when these personal observations touch others who can relate, turning personal observations into social commentary; a simple survival technique that pokes fun at this crazy life we call the Artworld. This is a secret to personal success.

Masks recommended. The gallery is limiting the number of people in the gallery at a time. For more information visit thompsongirouxgallery.com