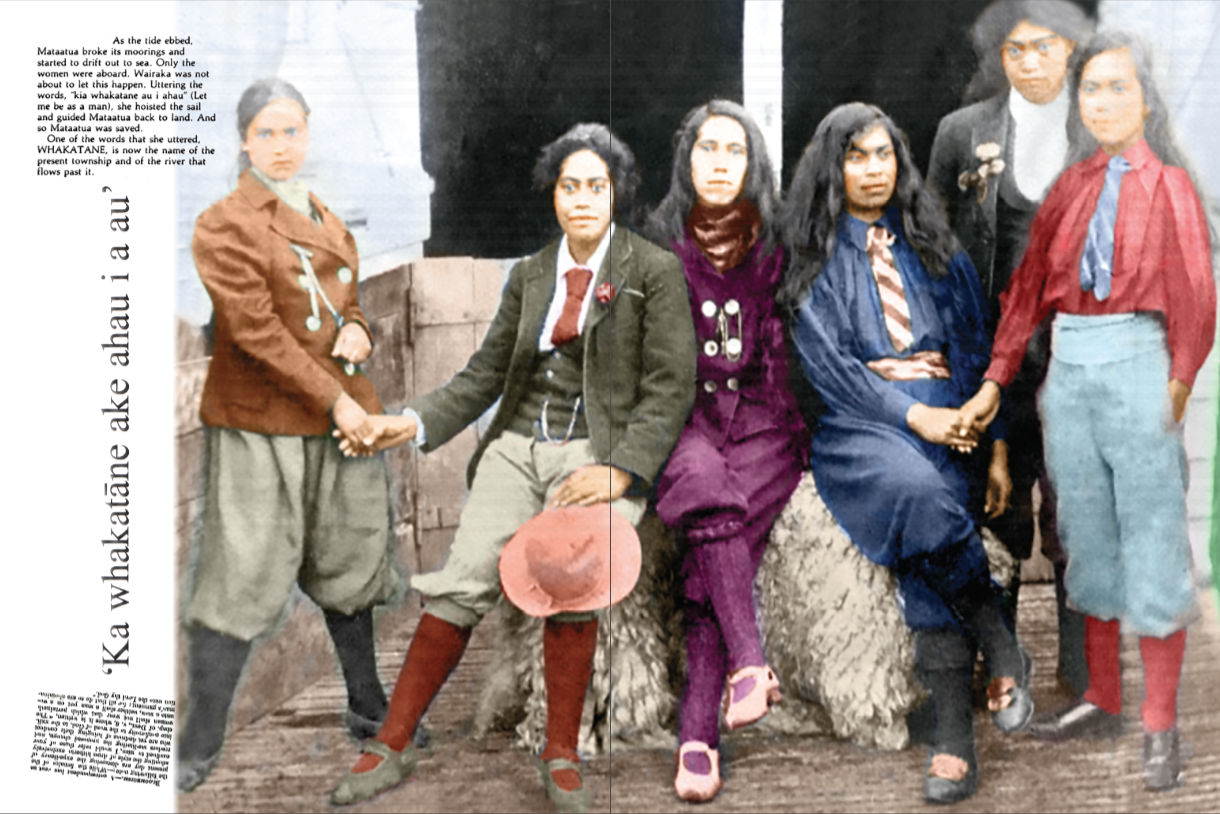 Window On Hudson is honored to inaugurate its newly renovated indoor exhibition space with multidisciplinary artist Dan Taulapapa McMullin.  Images and writings from Taulapapa McMullin’s book “The Healer’s Wound: A Queer Thierstory of Polynesia” will be on view from June 2 – July 4, 2022.

An Artist’s Reception will be held on Sunday, June 5th from 1-4pm as part of RECESS Pride: A Queer Artists Salon presented by The Hudson Eye, in partnership with OutHudson Pride Festival.  Dan Taulapapa McMullin will be signing books and reading from “The Healer’s Wound” at 1:30pm at Window On Hudson.  The salon and celebrations continue throughout the afternoon at neighboring establishments.  Visit https://www.thehudsoneye.com/recess for more details about THE and RECESS or RSVP at development@jonahbokaer.net

“The Healer’s Wound” is an artist’s book collaged by poet Dan Taulapapa McMullin based on their historical research in the queer cultures of their homeland Samoa and other Pacific Island countries.  The queer peoples of Polynesia formed societies of healers and traveling artists but these societies were suppressed during colonialism by America and Europe.  The book, through recovered images and texts, narrates the journeys of these indigenous queer cultures and how they came to continue to thrive today.  The exhibition includes large scale prints on canvas and works on paper.

Window On Hudson will also be open to the public on Saturday, June 11, 2022 from 5-8pm as part of the 2econd Saturday Hudson Gallery Crawl.

Dan Taulapapa McMullin is a Samoan fa’afafine artist and writer living on the unceded and ancestral homelands of the Muh-he-con-ne-ok, the Peoples of the Waters that Are Never Still.  Their book of poems “Coconut Milk” (2013) was on the American Library Association Rainbow List Top Ten Books of the Year.  “The Bat” and other early works received a 1997 Poets&Writers Award from The Writers Loft.  They co-edited “Samoan Queer Lives” (2018) published by Little Island Press of Aotearoa, New Zeland.  Their work was shown at the Museum of Contemporary Native Art, Metropolitan Museum, De Young Museum, Musée du quai Branly, Auckland Art Gallery and Bishop Museum.  Their film Sinalela won the 2002 Honolulu Rainbow Film Festival Best Short Film Award.  Their film “100 Tikis” was the opening night film selection of the 2016 Présence Autochtone in Montreal and was an Official Selection in the Fifo Tahiti Film Festival.  They can be found on instagram @dantaulapapamcmullin

About Window On Hudson

Window On Hudson offers storefront window exhibition space for artists of Hudson and the Hudson Valley.  Window On Hudson is committed to providing a platform for established and developing artists to display their work, of all mediums, while also offering professional development opportunities for emerging artists.  Window On Hudson exhibits a new artist on a monthly basis.