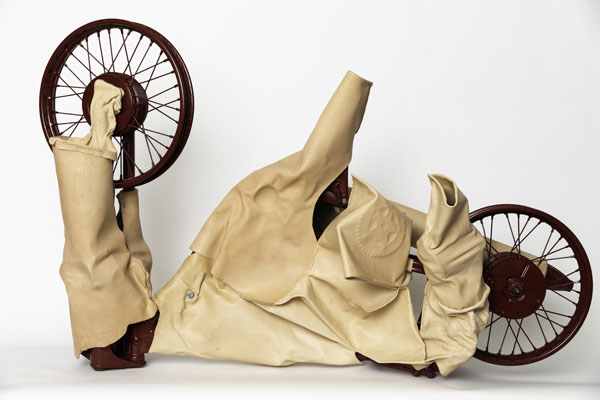 The Fifth Revolution presents a series of new works by contemporary artist Dan Devine. These sculptures made of molded and stitched leather with motorcycle parts present a confluence of Devine’s personal history and artistic practice. Devine’s new work encourages an urgent rumination on the implications of the emerging fifth industrial revolution and its living machines.

The choice of leather and motorcycle parts derives from two periods of Devine’s pre-artistic career: first as a competitive motocross racer in both America and Europe and later as a leather artisan at Jamie Jacob’s leather shop on Haight Street in San Francisco during the height of the Haight-Ashbury neighborhood. Devine employs these personally-significant materials to explore his career-long interest in recording objects and reversing conceptual boundaries. In earlier bodies of work, Devine had applied such tactics to blur the division of internal/external with his Inside-Out series (including his well-known Inside Out Cars) and of watching/watched with his Surveillance Sculptures series. In The Fifth Revolution, Devine turns his attention to the eroding boundary of biological/technological.

For these sculptures, Devine cut commercially produced cowhides and formed them by molding the leather pieces around motorcycle parts. Devine utilizes the unique properties of cowhide to produce simultaneous positive and negative records of the engulfed machinery. The haunted impressions left by the absented machine parts act as a memento memori, reminders of the fragile, machine-like systems that keep us alive.

These molded-leather records also echo Devine’s earlier work, where techniques such as frottage and photography are used to produce an object’s negative, or reversal. The sculptures of The Fifth Revolution not only offer tentative unions of flesh and metal, but also subtle recordings of the uneasiness of unions in our own time: both physical social proximity as well as the increasing presence of technologies within humans. The show’s title, The Fifth Revolution, alludes to this development. Scholars refer to the fifth industrial revolution as the epoch when humans and their technology finally merge. While such medical promises as laboratory-grown human organs and neurologically responsive artificial limbs might seem like the fulfillment of a utopian fantasy, the shadow of such developments such as AI-enabled weapons and technological behavior control should give us pause to wonder how the fifth industrial revolution will codify.

When thinking of Devine’s new work alongside such artificial aides, these sculptures seem to offer an emotional prosthesis for our own time: providing an experience of coming together when such an event feels almost impossible. Devine’s biomorphic sculptures possess a sense of sexuality though not explicit nor pornographic. Rather they reference sexuality as the union of things, the marrying of opposites: man-made and natural, organic and inorganic, inside and outside, hard and soft, living and dead.

At the center of The Fifth Revolution is Rider, the largest sculpture of the exhibition. The 350cc twin-engine JAWA 350 used in Rider offers a direct reference to Devin’s history as a motorcycle racer: while competing in international motocross races, Devine was sponsored by JAWA, a Czechoslovakian motorcycle made on the other side of Iron Curtain by a state-controlled communist manufacturer. In our contemporary age, the profound anxiety of an American rider racing successfully on a communist-produced bike may elude many of us, but at its time in the 1960’s, this uneasy pairing made Devine a competitor non grata amongst many of his peers.

The motorcycle of Rider has been plucked and stripped of all its mechanical parts and then painted a fleshy oxblood red (which also happens to be the racing color of Czech motorcycles). The motorcycle frame is then wrapped in molded leather, achieving Devine’s long sought after inside-out motorcycle. The challenge of the inside out motorcycle stems from the fact, as Devine illuminates, that “a motorcycle is already inside out.” And so Devine employs his tactic of reversal, inverting not the physical structure of the motorcycle, but rather the relationship to the motorcycle, reversing the dichotomy of man and machine to allude to a single hybrid entity, the ultimate ambition and anxious phantom at the center of the fifth industrial revolution: the living machine.

This inversion of the dichotomy of man and machine is one of many reversals that populate Devine’s oeuvre, ranging from his plaster casts of the space between wrecked vehicles to his 10-year project of raising a flock of sheep. Devine employs these reversals to make us question our assumptions. As Devine himself attests, “Once art starts solving problems, it becomes illustrative. If anything, art creates problems. It asks a question about the world.”

In The Fifth Revolution, Dan Devine has produced a new series of sculptures that uneasily pair man and machine, couplings that seem haunting harbingers of an inevitable future that make us pause and ask, “Where are we going?” And it is this ability of Devine — to raise necessary questions and bring together such unlikely and even conflicting elements — that make him a necessary and important artist for our own seemingly irreconcilable and disconcerting times.