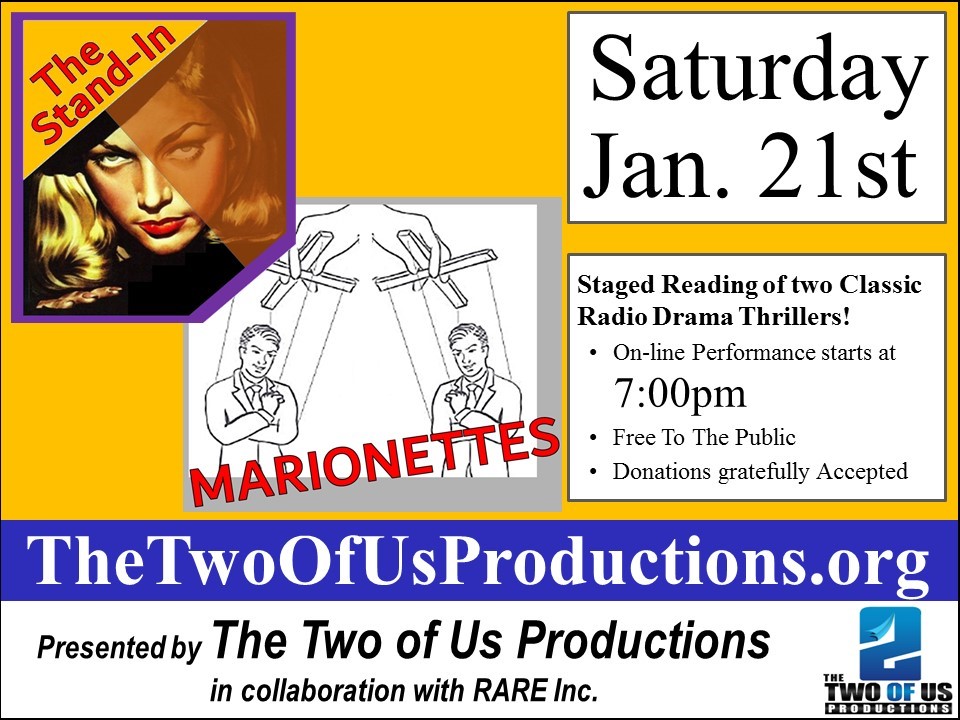 Virtual Staged Reading of chilling radio dramas from Suspense Theater & Dimension-X: “The Stand-In” and “Marionettes”. Presented by The Two Of Us Productions, the award winning theater company based in Columbia County NY, in collaboration with Roving Actors’ Repertory Ensemble (RARE) Inc.

In Suspense Theater’s “The Stand-In” we meet Diana Burke, a talented actress chafing under her role as a stand-in for the famously imperious actress Madame.  It turns out that Madame’s husband Dennis O’Brien is also chafing under his role as the most recent & always supportive spouse.  Together, Diana and Dennis decide they’d each rather play a leading role together, but without Madame.

In “Marionettes”from Dimension-X we meet two happily married men:  Henry Smith and Walter Graeling.  Henry loves his wife, but would like more time with the boys.  While grousing at the local watering hole, Walter tells Henry that he has just the thing to solve Henry’s problem.  It turns out though, that what is good for the gander is also good for the goose in this strange tale of technology replacing reality.

On-line via ZOOM, see both of these thrilling dramas in the comfort of your own home!

This performance is free to the public, donations are gratefully accepted.  To R.S.V.P and get your access code please visit www.TheTwoOfUsProductions.org