William Bailey:  A Paring Down to the Essential

At Indiana University, I took “Life Drawing” from William Bailey, who spent only seven years at our school, then accepted a position at Yale and a decade later had one of his paintings featured on the cover of Newsweek. He was known, while he was at I.U., as the best artist in the department, but I also found him to be the best teacher I had in college. At that time, in the 1960s, it was the custom of the painting and drawing faculty to meet briefly with the class, set up the model, then escape to their studios. Not Bailey. He stayed with his classes for the entire three hours, running drills like a coach. We would begin with 10 second gesture drawings, move up to 30 second, then graduate, eventually, to a two-hour drawing. We used the HB pencil on high quality white paper (he loathed newsprint and wouldn’t allow it in the drawing room), but he also favored ink because it was difficult, getting the line right the first time, or learning to deal with mistakes. All the while we were drawing, he would circle the room, coming up behind us, pointing to a particular line, “What’s that doing? How is it working?” Every line, he taught, had to have a purpose. If it didn’t, it shouldn’t be there. (It was a lot like writing, I realized later.  Every word should be pulling its own weight.)

His critiques were tough but never sarcastic, as were many of the other professors’. He would first ask, after we’d tacked our drawings to the wall, “What do you see that you like?” We’d mention the curve of a hip or a long, sinuous line that had captured a certain pose, and then we’d go on to what could be improved. (As a writing teacher, I run critiques of papers the same way, first asking students to find what they like, and then moving on to what can be improved.)

Also unique to Bailey was taking attendance. Most of the professors in the 60s found it uncool to care about attendance, but Bailey began the class by calling the roll. On snowy days in February, when we might otherwise have cut class, we were all there for Bailey.

To this day, when I draw, I feel William Bailey coming up behind me, reaching down, tapping the paper. I think I learned more from him than from any other teacher I had in college.  But it wasn’t just drawing I learned: I learned a method of working and critiquing that forms the basis of my teaching:  a paring down of form to the essential.

Sandra Dutton is a writer and artist.  Her most recent novel, Mary Mae and the Gospel Truth, was published by Houghton Mifflin Harcourt, as was her picture book, Dear Miss Perfect:  A Beast’s Guide to Proper Behavior, which she wrote and illustrated.  She also publishes essays (Commonweal Magazine and The New York Times Book Review).

Her paintings and drawings have been shown at the Maine Art Gallery (Wiscasset, Me.) the River Arts Gallery  (Damariscotta, Me.), The Belfast Poetry Festival (Belfast, Me.) University of New England, and University of Southern Maine, among other venues.

She lives in Earlton, New York, at Dancing Lamb Farm, with her husband, Wayne Sheridan. 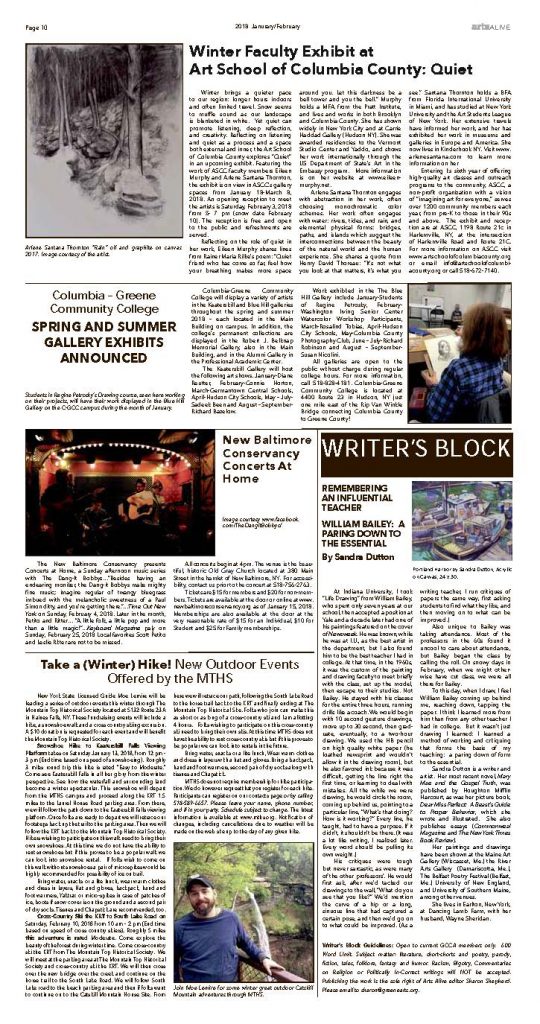