Jeanne Heiberg: A Life and Spirit in Art

A Biography Written by Sandra Dutton

Jeanne Heiberg’s apartment is filled with the art and books she has produced since being a student at New York’s prestigious Cooper Union.  She shows me the silk screened prints she created for The Liturgical Press, a series entitled The Good News in Pictures, which was used as a teaching aid in ecumenical classes. The colors are bold and the lines are reminiscent of Byzantine art.  She also shows me a print she did of Caesar Chavez, “during my activist phase,” she says, and many other pieces in the apartment, including a regal blue and green fabric wall hanging.

We settle down at her round oak table for a snack of white wine and cheese as we discuss her childhood and career. “I have always loved art,” Jeanne says. She remembers, in kindergarten in Brooklyn, New York, making an oilskin doll, painting on the features and stuffing it, and always being excited about drawing and painting.  “I loved school,” she says. In sixth grade, she was asked to draw a deer on the blackboard for Christmas.  “Because everyone in the class would see my drawing,” she says, “I began to see myself as an artist.”

Jeanne says she worked summers during high school at a resort in Middleburgh, New York, “Alice’s Wonderland”, owned by a friend of her mother’s.  She met a Mr. Henry, who was head of the Red Cross, and would accompany him on his painting trips, taking along her own art supplies.  Realizing how happy she was drawing and painting, she said to him one day, “I wish I could be an artist.”

And so she did, passing all the rigorous tests and attending, like all Cooper Union students, on full scholarship. “I had six hours of drawing every Monday,” Jeanne says, “and painting and art history with Dr. Paul Zucker.  This opened up whole worlds.” But her favorite class was two-dimensional design, with a Mrs. Anderson, in which she worked with planes on the paper and experimented with color.  One can see this love of design in all of her work.

Another important influence in Jeanne’s life was Dorothy Day, a Catholic activist who ran a soup kitchen in Manhattan.  “My boyfriend took me over to meet Dorothy Day,” says Jeanne, “and I was so impressed with Dorothy’s ‘spirituality in practice,’ that I decided to become a Catholic. This did not set well with her parents, whose own parents were Protestant clergy:  her father’s mother a Unitarian minister, and her mother’s father a Seventh Day Adventist.  They had never fully supported her attending Cooper Union (they had wanted her to study something more practical) and they said if she joined the Catholic Church, she could not live at home.  “But I had made up my mind,” says Jeanne, and with the help of school officials and friends she made it to the end of her three years at Cooper Union and earned her certificate.

From there Jeanne took up residence at Grailville, a female religious community in Loveland, Ohio, where she put all her skills to work: “I painted, danced, sang, and lived my faith.” She also drew pictures for a Twelve Days of Christmas book, taught religious education for local churches, and began writing for liturgical magazines.

Jeanne might have stayed on at Grailville, an idyllic community, but the work she did there won her scholarships to the California College of Arts and Crafts, where she earned two BFAs in Illustration, education, and a minor in English; and an MFA in Fine Arts.   She then taught two-dimensional design at Holy Names College in Oakland.   Returning to the East Coast in 1970, she taught at Trenton State College and wrote for church education programs. But at the same time Jeanne explored artistic goals, she became ever more fascinated with writing.  “With an editor’s encouragement,” she says, “I produced fourteen published books and over one hundred magazine articles, newspaper features and columns.”  She was also a featured writer for The Catechist. 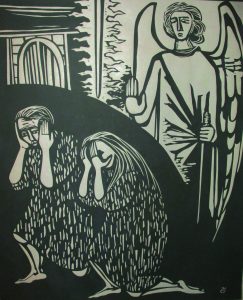 One of my favorite of her books is Contemplation and the Art of Salad Making, published in 1982 by the Crossroad Publishing Company.  Grailville friend Trina Paulus wrote the introduction and tells us that Jeanne combines “folksy stories, symbolic meaning, tasty and nourishing recipes, and how to meditate.” Leafing through, I see a heading, “Cosmic Unfolding Salad,” where Jeanne discusses her memories of the onion and includes two fascinating recipes, “Poet and Peasant,” featuring onions, apples, and butter.  And another recipe, “Peasant and Prince,” featuring a large red onion, two oranges, a green pepper, and blue cheese.  Jeanne reminds us of our onion-like possibilities, saying “We must dig into our deep self, partly unconscious, to unearth daily the meaning of our own unfolding, the divine purpose in our life.”

Many in Athens have attended Jeanne’s workshops in creative writing. She encourages work in any mode—poetry, fiction, essay—and gives wonderful prompts. These workshops are usually held in the Athens Cultural Center or at her own Rivertown Apartments in their Community Room.   “I like to begin with a guided meditation,” she says, “and ask students to focus on something such as the many forms of water. I love giving prompts that allow writers to reach their deeper selves.” She usually holds the workshops in sets of three, a series of three Monday evenings, for instance, or three consecutive Saturday afternoons. She has produced two lovely anthologies of the works of her students, People, Prose & Poetry, (2002), and House of Words, (2007), both obtainable through the Greene County Library system.

Jeanne is a delight to be with and bustling with ideas. Although she no longer writes for the Catechist, (It was sold to another magazine three years ago.), she is at work on several writing projects:  a memoir, which was born out of an “earliest memory” exercise discovered in a creative writing class she recently attended.  And a musical with the working title of Adam and Eve with such amusingly named characters as Faithsprout and Cleartruth. Working with her on the music is Brian Dewan. She is also slowly revising a biography she wrote several years ago, Honey:  A Life in Black and White, on blues singer Honey Johnson, who lived at Rivertown Apartments in Athens before she died several years ago.

Though eighty-seven years old, Jeanne is as vibrant and curious as an eighteen year old.  She is a true friend to other artists and a dynamic force in the cultural and religious life of Athens and Catskill.  I look forward to seeing her works develop and hearing of her latest passions.