Just in time for this heated election season, Greene County Council on the Arts’ new exhibit “It’s All Politics” features a selection of political art past, present and future. On view October 8 through November 12, 2016, with an opening reception Saturday, October 8, 2016 from 7-9pm, “It’s All Politics” is co-curated by international artist Vahap Avsar, who was born in Malatya and whose upstate home and studio is in Athens, New York. While he has exhibited his work all over the world, including Ankara, Istanbul, Amsterdam, Berlin, London, and New York, this exhibition marks his Greene County debut. To honor the occasion, GCCA is (for the first time in its 41-year history) allowing Mr. Avsar to use its entire storefront windows for his installation piece “All The Places You Will Go.”

All The Places You Will Go is an installation in the form of a bus terminal kiosk that was popular in Turkey in the end of 20th century. These bus terminals were the lifeline of rural communities connecting different towns with the metropolis. Traditionally handmade signs were the name of bus companies and indicate the destinations within the boundary of the country at the same time. In this installation signs are made by hand and refer to the major Kurdish towns under assault by the governments they live under in Turkey, Syria, Iraq and Iran. In the recent years these communities are torn apart by the war raged by the governments and ISIS.

This bus station is a utopic one as it uses the original Kurdish names of the towns, not the current names adapted by the ruling governments, and they also assume a time which one can get a bus to any town in Kurdistan which is spread in to four countries, regardless of the national boundaries.

Avsar is joined in It’s All Politics by twenty-four other artists who share their creative statements on a wide range of political issues – voters’ rights, immigration, refugees, gun violence, capital punishment, war, racism, global warming and others. The show also represents a broad spectrum of mediums, including photography, sculpture, paintings, monoprints, wearable art, quilting and assemblage.

To highlight a few of the artists in the show: Maciej Toporowicz, who was born in Poland and is currently based in Brooklyn and Grahamsville, NY, works in mixed media including painting, photography, video and sound. His most notorious art project, Obsession, was well reviewed in The New York Times. His piece in It’s All Politics is one of a series on IEDs. In his words: “I took pictures of US Humvees bombed by Improvised Explosive Device (IED) in Iraq and Afghanistan. I crumpled it into paper ball and photographed it, so they look like cars sculptures by John Chamberlain.”

Crosby “ClockWork Cros” is a Surrealist artist who was born and raised in the Lower East Side of New York, and makes functional working wall clocks that challenge ideas about disposability, longevity and reputation, while exploring the consumption of celebrity and have exhibited all over the world. His piece for this show is entitled “The Party’s Over” and consists of two melting clocks of Hillary and Trump on either side of a set of glass framed deflated balloons with the ribbons hanging low from behind down the wall.

Graffiti and tattoo artist, Jerami Goodwin (aka Sean Penncils), who lives and works on the Bowery in New York City, has recently started to exhibit large scale artworks featuring diversity in style and media, using different symbols and imagery. In his painting “Mao” Goodwin introduces us to his world of codes and inspiration.

Megan Stack’s digital painting “Respect my Authoritah” compares the personality and decision making Kim JongUn to the similarities and immaturity of Eric Cartman from South Park.

Ken Tannenbaum’s photograph “Man in Drawer” “occurred to Ken in the midst of a down day, feeling boxed in and pressured. “Transition came like pulling teeth, but it came and continues to…ouch,” he says of the piece.

GCCA is also proud to include in the exhibition an original Keith Haring “Free South Africa” t-shirt courtesy of Michele Saunders, who is responsible for introducing Vahap Avsar, Crosby “ClockWork Cros” and Jerami Goodwin to GCCA.

The intention of the It’s All Politics exhibition is not to endorse any particular candidate, party, political system or point of view, but rather, to show how political art can engage and encourage discussion about different issues, and provide reflection on our social and political life. To provide some context, some examples of popular political art in the past 100 years: the British graffiti-artist Banksy – known to some as the “voice of the discontent of our society;” Shepard Fairey’s Barack Obama Hope Poster which became an instant international icon during the 2008 Presidential election; and perhaps the most famous political painting, Pablo Picasso’s Guernica.

Similarly, the artists in It’s All Politics are striving to make an impact on the social consciousness of the world through their individual creative expression. As we view their work, we may ask ourselves which category of political art does the piece fall under: sociopolitical; artistic point of view; propaganda; protest; or satire? What is the artist saying or asking? And what does the piece ask of us, if anything?

Join Vahap Avsar and all the artists in this powerful exhibition at the opening reception for “It’s All Politics” on Saturday, October 8, 2016 from 7-9pm at Greene County Council on the Arts, 398 Main Street, Catskill, NY. For more information on GCCA Visual Arts Program, this exhibit and the wearable arts fashion show visit www.greenearts.org. 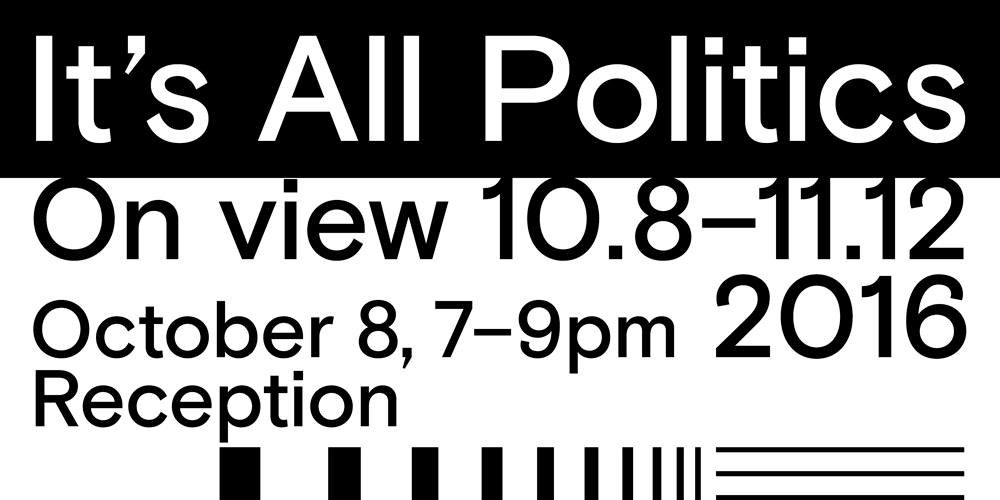