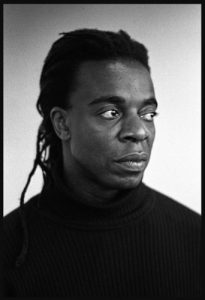 Greene County Council on the Arts is proud to announce that sculptor Willie Cole will be guest curator for its “Off the Walls: From Junk to Art” exhibit, for which it is currently accepting submissions (deadline is February 18, 2017). On view April 22 through May 27, 2017, Off the Walls will be dedicated to 2D and 3D artwork made of recycled/re-purposed materials, with the goal of bringing the environment to life in ways previously unimagined. 3D work will be presented both inside the GCCA gallery and outside in nearby parks, lawns and public spaces in and around Catskill NY. Willie Cole is an internationally renowned sculptor who works exclusively with recycled materials and has extensive experience with large installations, both indoors and outdoors.

As John O’Rourke wrote in Transforming Everyday Objects into Works of Art (BU Today), most people looking at a discarded pair of women’s high heel shoes, an iron, or an old hair dryer would likely dismiss them as junk. But for sculptor Willie Cole, these ordinary objects are alive with artistic possibility. In his hands, old hair dryers are transformed into a Buddhist wheel of life, a heated iron’s scorch marks on canvas or paper become emblematic of African shields, and women’s shoes morph into exotic blossoms, chairs, even a sculpture of civil rights icon Rosa Parks. 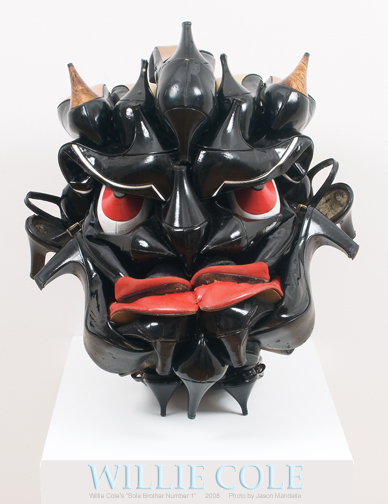 Considered one of today’s most influential sculptors, Cole describes himself as a “perceptual engineer”—taking everyday objects and through repetition creating visually stunning three-dimensional works that become a vehicle for commenting on serious issues like consumerism and race, often in a playful way. His work, he has said, is about creating new ways to see old things. Three years ago, long after his sculpture had earned him an international reputation, Cole began collecting discarded plastic water bottles, melding them into fanciful, often dazzling sculptures. In taking discarded objects and turning them into something beautiful, the artist is asking us to think before we throw something away, to reconsider how we use and dispose of items. 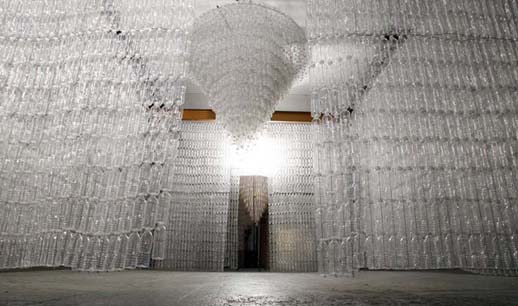 “From Water to Light” by Willie Cole

Cole’s sculptures can be found in the permanent collections of the Museum of Modern Art (MOMA), in New York, the National Gallery of Art, in Washington, D.C., and many other institutions across the globe. Cole studied briefly at the BU School of Visual Arts in the 1970s before transferring to the School of Visual Arts, New York, graduating in 1976. His numerous honors over a nearly four-decade career include the David C. Driskell Prize, the first national award to honor contributions in African American art.

While Cole is based in New Jersey, Cole has a strong connection to the Hudson Valley (his daughter goes to Bard College) and upstate New York, where he visits often. He is looking forward to reviewing submissions from area artists, and will be looking for work that shows ingenuity and creativity in how artists use what most people would deem useless junk or trash to create meaningful, thought-provoking art.