Deborah Artman is a fiction writer, poet, librettist, editor and educator whose career is defined by a restless urge to explore new forms and collaborate often with artists in other media. With a background in dance and music in addition to writing, she has worked in opera, theater, publishing, film and radio as a writer, performer, director, dramaturg and an “extra eye.” Her stories, poems and essays have appeared in numerous national journals, including the New York Times Magazine. You can follow her on Instagram @deborahartman99.

The chamber version of Artman’s opera Acquanetta, written with composer Michael Gordon, premiered at the 2018 PROTOTYPE Festival in New York and will be at the Bard 2019 Summerscape Festival at Bard College from July 11 to 21. Contact the Fisher Center for tickets at 845-758-7900, Monday through Friday, from 10 am to 5 pm, or online at https://tickets.fishercenter.bard.edu/events. Acquanetta will be released by Cantaloupe Records on CD in July and available on iTunes. 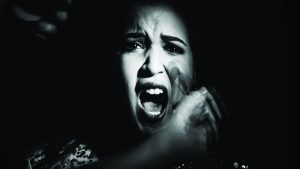 When the composer Michael Gordon called me up in 2004 and said “Help!,” I wasn’t sure if I could do it. The topic of the opera he wanted to make was Acquanetta, a B-movie star from the 1940s. Horror movies and science fiction were never really my thing. When I think about them, I remember weekend sleepovers as a child at my best friend’s house. She had brothers, and everyone loved to stay up and watch classic movies like “Frankenstein” and “The Mummy” on TV on Chiller Theater, the late night Saturday horror-movie show hosted by Chilly Billy in Pittsburgh, Pennsylvania. I would inevitably fall asleep in a state of exhausted terror.

When I began researching Acquanetta’s life though, I became a detective solving a curious mystery. Her New York Times obituary in 2004 makes no mention of Mildred Davenport. “Acquanetta, 83, A Star of B Movies,” the headline reads, with a few brief paragraphs describing the local celebrity, former model and B-movie actress who died in Arizona. “There’s something intriguing and not quite right about this obit,” Michael said to me then. My task was to discover more about the woman with the one-word moniker.

Her past is a puzzle. Acquanetta arrived in New York City in the early 1940s with a name very close to a popular hairspray. Claiming Native American roots, she told people her name meant “burning fire in deep water.” A stunning beauty with a come-hither stare and sensuous pout, she quickly became a pinup model and a darling of the celebrity press, who breathlessly monitored her comings and goings to clubs like the Stork Club and the Copacabana. To boost her career, and feeling that being a Native-American wasn’t very sexy, gossip columnist Walter Winchell and newspaper tycoon William Randolph Hearst changed her identity: she was now a Latin bombshell –– named “the Venezuelan Volcano” –– whose good fortune continued with a Hollywood movie contract.

In 1943, Acquanetta lit up the screen in the B-movie horror film and now cult classic, “Captive Wild Woman.” Beautiful and exotic, she played the untamable and gorgeous creation resulting from a mad scientist’s experiment on an ape, a role the young actress sizzled in and played so well a sequel was soon in the can. So began a brief career in bread-and-butter (hence “B”) films that ended only a few years later when Acquanetta inexplicably walked away from the Hollywood studio system.

Why did Acquanetta turn her back on her contract with Universal Pictures at the height of her career? In 2004, when I first researched her past, there was little to be found in books and next to nothing about her on the internet. I did find some interviews in early fan magazines. The more I unearthed, the more elusive her origins became. Was she born on an Indian reservation near Cheyenne, Wyoming, as she claimed? Was she raised in industrial Norristown, Pennsylvania? I found a brother of hers still alive, who was the first African-American judge to sit on the Common Pleas Court in Montgomery County, Pennsylvania. I actually called him, but he revealed nothing, explaining that he was down South when Acquanetta began her trajectory of fame. Who was Acquanetta?

Michael and I decided to base the narrative of our opera on the defining moment of Acquanetta’s career: the extraordinary scene in “Captive Wild Woman” where the mad doctor conducts his experiment and unveils his ravishing creation. Researching the lives of the actors and director of “Captive Wild Woman” gave me plenty to work with. Everyone had a fascinating past.

The director Edward Dmytryk, for instance, would go on to become one of the Hollywood Ten, the group of blacklisted Hollywood professionals who refused to testify to the House Un-American Activities Committee in their investigations of the Communist Party during the McCarthy-era Red Scare. Dmytryk, though, hungry to work again, eventually caved and named names, and his subsequent successes and Oscar nominations as a director were always shadowed by the betrayal felt by some of his peers.

The mad doctor was played by John Carradine, who starred in over 300 films and became known as “the hardest working man in Hollywood” until maybe Samuel L. Jackson dethroned him. Carradine balanced his eccentric character and B-movie roles with his own, touring Shakespeare company.

The other actors had their own claims to fame — scream queens and debutantes, it was a time when women in particular were locked into one type of role. Did Acquanetta leave the business because of typecasting, as she said in one interview? Was it because producers expected “more” from her in exchange for better roles, as she intimated in another article I read about her?

I had learned from prior collaborations that when it comes to text in opera, less is more, and it was an exciting challenge to synthesize everything I learned into a lean libretto. I drew on my first literary roots as a poet to hone the libretto to the most essential words. I had worked with Michael Gordon on two previous projects, so there was an ease in our communication. He might call me and say, “Deborah, I need 5 syllables here.” In one instance I had to fight for some of my language, believing it to work when he had some doubts. That aria is now a highlight of the opera.

At the dress rehearsal for the premiere of this chamber version of Acquanetta last January, I cried. Daniel Fish, our director — who has just been nominated for a Tony for directing “Oklahoma!” now on Broadway — had cracked the opera open and elevated it to an electrifying opera-film-theater hybrid never before seen in the opera community. Michael’s music is amazing — dance-in-your-seat rhythms combined with eerie vocalizations and beautiful layered harmonies — it covers a wide terrain between spooky, plaintive, comic and ethereal.

It was the first time I felt the impact of what I had written. I was astonished to hear the themes leap out so strongly. Acquanetta’s story is a quintessential American story about how women often have to conceal their truth and hide in plain sight, reinventing themselves to fit an accepted narrative. It feels particularly compelling in the current climate when the role of women in Hollywood is being reevaluated and scrutinized.

The mad scientist Doctor, the insistent Ape, the reluctant Brainy Woman, the visionary Director and the beautiful monster herself, Acquanetta, gather in this re-imagining of the fateful laboratory experiment. These vivid characters reveal their inner longings and emotional shadows in what is ultimately a meditation on the meaning of identity, transformation, stereotypes and typecasting, set in the heyday of Hollywood gloss.